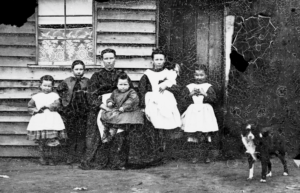 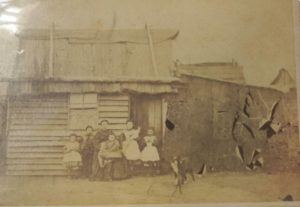 This image is captioned by the State Library as “Mother and girls outside weatherboard house with bark roof, Gulgong area”.

Long before selfies were a thing, in fact, before Gulgong was even a town, there was another photographic trend called “cardomania”. This involved a thin paper photograph mounted on a thicker paper card (the size of Victorian-era visiting cards). They were traded among friends and visitors in a global craze stemming from the use of Napoleon’s image in this format in 1859.

Widely known as a carte-de-visite (CdV) because of its French origins, these tiny souvenirs were very popular in the American civil war and served two roles. One was to share portraits of loved ones between soldiers and family members. Another was the collection of photos of celebrities like Abraham Lincoln and Ulysses S Grant (at least in the North).

It is not known how many of the Holtermann Collection images were distributed in carte-de-visite format. This would have been a handy and inexpensive way to share images between hopeful prospectors on the Australian goldfields and family members who remained interstate or overseas. It may be the reason that Holtermann subjects, like Peter Gondolf, fronted up to the Hill End studio of Merlin and Bayliss to sit for photographic portraits.

The Gulgong Holtermann Museum has been keen to obtain an original CdV. While some Holtermann-themed images exist in private collections, they are rarely available for purchase. But one of our volunteers, Julie Hulston, recently found one available on an auction site and with a generous donation by Dr Meredith (son of Margaret Meredith) the rare card was acquired.

Had a name been recorded by the photographers we might have been able to learn more about the subjects of this picture. This is the kind of work the Holtermann Research Unit is involved in. Our recent training session showed volunteers how to pursue the clues in a photo and look up online records such as Trove’s digitised newspapers and NSW Births, Deaths and Marriage records to round out the stories of Gulgong residents from 150 years ago.

We plan to offer this course to members of the public in the near future. Anyone interested in developing these skills to delve into their own family history can attend. Follow our Facebook page to learn of upcoming dates and booking details.