When the great, great grandson of Sun Tong Lee visited the Gulgong Holtermann Museum he said, “Apparently Sun Tong Lee owned many stores in NSW and it is unlikely that he ran Gulgong branch”. The Research Team has since uncovered that Sun Tong Lee was quite active in the town from the time he opened the store in Herbert Street in July of 1871 until he left for Sydney in 1875.

In February 1872 he advertised two lost purses that were left in his store. In August he opened a branch store at Home Rule. Lee was present in Gulgong to sign the Petition for Municipality in 1873 and eyewitnesses reported the following act of charity that year:

1873 – A GENEROUS CHINAMAN
A few days ago, during the heavy rain and piercing winds, a poor woman might have been observed passing up Herbert Street, with an infant in her arms and another unfortunate child clinging to her skirt. Heavens knows where she was straying but her appearance was that of object poverty. A few persons were looking on with pity when a Celestial was observed to hurry from his place of business with a large parcel which he gave to the woman, and at once returned to his store. The parcel proved to be a pair of superior blankets. The gift was made in a quiet manner without the slightest ostentation, that it took those who witnessed it by surprise. The donor was Sun Tong Lee, a Chinese merchant in this town, and this generous action is in the highest degree creditable to his humanity.
Source: Gulgong Advertiser, Issue No.194 Wednesday, June 25, 1873

On his departure, the local paper reported:

“since his arrival in Gulgong—now some four or five years ago—he has earned the respect of all classes of the community and we feel sure that many will regret his departure, especially those who have in their time of need received many acts of kindness from him.” 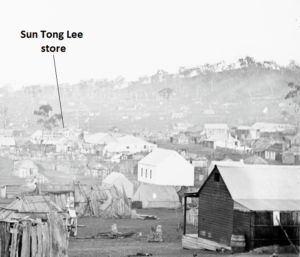 Step inside the front gallery of the Gulgong Holtermann Museum (free access) and we will show you Sun Tong Lee’s store in the 1872 panoramic photo of Gulgong (extract attached here). Today, the Sun Tong Lee building facade is a highly recognisable part of the Pioneers Museum on Herbert Street.