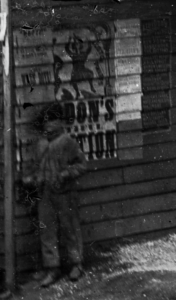 As Henry Beaufoy Merlin and Charles Bayliss made their way around the streets of Gulgong in 1872 – documenting the people and their homes and businesses – one mysterious figure kept cropping up: Thiodon!

Posters for Thiodon’s Exhibition were pasted on walls and boards around the town and can be seen here on the wall of Tuckerman’s Hotel on Mayne Street. But who was Thiodon and what was his exhibition?

1871 – THIODON’S ENTERTAINMENT
Those who repeat their visits to the Prince of Wales Theatre, to witness the strange and pleasing mechanical movements of Thiodon’s Exhibition, do so, no doubt, with a view of trying to make out, if possible, how these things are done. We have, however, met with no one who has yet made a reasonable guess as to the rope vaulting of the beautiful, and beautifully dressed female figure, whose varied and graceful and seemingly daring evolutions on the slack rope amaze the beholder. If the figure thus presented to the gaze of the audience were plainly attached to the rope, some idea might be formed of an internal mechanical movement to produce the spinning, and some of the attitudes and positions of the automatic figure. But the hands which at first have easy hold of the swinging rope, release themselves, and they are stretched out right and left, and on one or two occasions, the figure throws itself, just as we have seen living slack rope vaulters do, from a sitting posture, as if dropping to the stage, but it arrests its own fall by seizing the rope with one hand, and after oscillating for a time regains, as if by a human spring, its former position. In like manner it stands upon its head whilst the rope is in motion, and performs many of the daring and graceful movements which one would expect from an acrobat of the first water. Not less surprising, yet much more amusing are the conversations, the witticisms, and the arch recriminations of the loving pair of clear speaking dwarfs. This part of the entertainment evoked the merriest possible laughter, and the pleasant ‘good night’ of the interesting and happy couple was received by the audience in demonstrative responses. The ‘Mirror’ as the panoramic views are called, is not nearly as much a misnomer, as some of the moving pictures we have seen exhibited in the town. The views are more highly finished, and a sufficient number of them is shown to impress us with the vast and rapid national and spirited progress of the United States. The choicest specimens of architecture as displayed in the public buildings of New York, Philadelphia, Harrer’s Ferry, Baltimore, and Washington, are placed before the audience under lights which bring out the perspective of the scenes most finely.
The ‘Falls of Niagara’ form the closing view of the ‘Mirror.’ The interest of the whole is very pleasingly increased by Mademoiselle Thiodon who presides at the piano, throughout the evening. The airs, and in some instances the apparent impromptu accompaniments, are executed with the nicest taste, and from their suitableness to the passing scenes give an effect which must be seen and heard to be appreciated. Mr. Lewis, the lecturer fills his position with as much credit as any gentleman we have previously heard, to whom similar duties have been assigned. The freshest witticisms, many of them original, accompanied with the most intelligently conceived local allusions, seem as if they were there and then the lecturer’s own impromptu conceptions. A number of sparkling anecdotes a la Yankee are interspersed, altogether rendering the entertainment innocent, respectable, and effective.
Source: Bathurst Free Press and Mining Journal (NSW : 1851 – 1904) Sat 6 Apr 1872 Page 2

Photos: Poster for Thiodon’s Exhibition from the wall of Tuckerman’s Hotel
Source: Mitchell Library, State Library of NSW (a2822215)