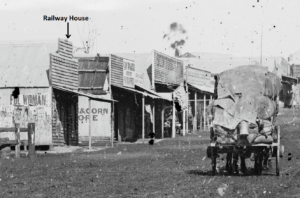 Research into the Holtermann Collection can be like trying to complete a very large jigsaw puzzle under nightmarish conditions: many pieces fall into place beautifully but as you approach the end you realise some pieces are missing, some are broken and others are on fire!

While it seems that Beaufoy Merlin and Charles Bayliss attempted to photograph all the businesses in town in 1872, there are some notable absences. There were two local photographers at that time, Cam Baker and George Anthony Tissington. We have no photo for the latter and only a partial business premises for the former. Coincidence? Or were they intentionally excluded as business rivals?

We know from newspaper articles and property maps that Daniel Asher had a general store on the corner of Herbert and Little Bayly Streets in early 1872 but you won’t see it in any Holtermann pictures. It disappeared on 20 April, as this newspaper correspondent recorded:

Shortly after I commenced this letter, at a little before 7 o’clock this evening, an alarm of fire was raised in Herbert-street, and it soon became evident that Asher’s general store was on fire. The great want of water struck with appalling force upon the senses, for if the flames gained any ascendency the greater portion of the town, built as it is of such fragile materials, would have been jeopardised. 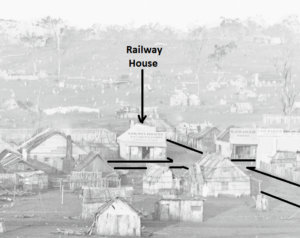 But the absence of Asher’s building – and F W Clifford’s Treble X Brewery next door – provides a clear line of sight (in the Holtermann panorama taken from Church Hill) to another business – a bonus jigsaw piece!

The façade reads: RAILWAY HOUSE – MATTHEWS/FROST – GENERAL STORE. There is no close-up of this particular shopfront in the Holtermann Collection but it can be spotted side-on in one view of Herbert Street. Without the fire we may never have had a good view of the business name.

There were three Frosts in Gulgong at the time. William, (a butcher), Henry, (an innkeeper) and John Thomas Frost who was the owner of this corner block. Finding further evidence was difficult since no Gulgong newspapers appear in Trove (the National Library’s collection of digitised newspapers). But using “old school” methods I found one advertisement that tells us a bit more about the business:

RAILWAY HOUSE HERBERT STREET MATTHEWS & FROST BEG to inform the public that they have Now Opened their SPACIOUS STORES with a variety of stock Drapery Clothing Boots Groceries Ironmongery And every other Article requisite on a Goldfield, which in QUALITY and PRICE cannot be surpassed by any other store on the Goldfield. One trial will prove the Fact.

That makes Frost a direct competitor for Asher and he was located on the same intersection. My initial thoughts were “prime suspect” but the papers reported otherwise:

The fire was caused by a too common accident, the bursting of a kerosene lamp; but it would have been easily extinguished by means of a blanket thrown on it by Mr. Asher, jun., had not someone with injudicious zeal, thrown a quantity of water upon the flames, and so spread the oil bearing them all over the place.

Step inside the front gallery of the Gulgong Holtermann Museum (free access) and we will show you Railway House in the 1872 panoramic photo of Gulgong and the place where Asher’s store used to stand. Today Frost’s store is replaced by the entry to the Pioneers Museum and part of Little Bayly Street forms a streetscape within the Museum.