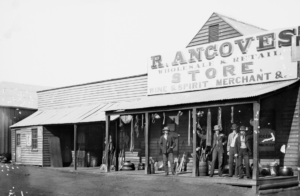 Richard and Mary Angove had a hardware, grocery and wine store on Mayne Street, between the Bank of New South Wales and the Newmarket Sale Yards (where the Butcher Shop Cafe is today). The small room under the verandah on the eastern end was where Mrs Angove conducted Gulgong’s first Post Office.

This was the location of arrivals of Tarrant’s coach service from Mudgee and the following newspaper article from 1871 paints a vivid picture of that spectacle.

…a sensational event in its way, (and also an acknowledged institution), is the arrival of Tarrant’s coach from Mudgee, every evening about 8 o’clock; there are other coaches besides Tarrant’s, but Tarrant’s is the coach, being the best known and largest upon the road.
The knight of the whip is careful, attentive, and civil, and immediately upon the rumble of the wheels being heard, and the huge caravan-looking vehicle looms in sight with its two lamps brightly burning, then these gentlemen miners, distracted with having nothing to do, waiting patiently for something to turn up in their favour, seize this, their rightful and undisputed opportunity, to pop out from all sorts of imaginable places—from under verandahs, from public houses, billiard-rooms, and elsewhere, flocking down the street after the coach in a kind of a quick march, jog-trot, be-in-time sort of a step, awaiting its being pulled up in front of Angove’s store, which, when done, they, the miners, pronounce sentence according to the evidence then heard and seen.
The sides and back part of the coach is surrounded by individuals, who close up in that peculiar manner known only to the mining community, and, I think, I can safely assert, cannot be equalled or excelled by any other class. Our worthy Jehu, holding the reins in one hand (while his youthful head man unharnesses the horses), and his head in the other hand, trying to collect his scattered wandering thoughts, most probably recollecting something that he had forgot, and that recollection immediately being everlastingly banished from his memory by the innumerable questions pitched in all manner of keys—all being asked at one time, and each and all expecting to be replied to first such as, “Did you bring that for me, Tarrant— and what did he say?” are the telegrams up; and “Has Mr. Brown come?” &c. However, Tarrant pulls through it all, and manages at the same time to keep one eye and one hand open—the hand receiving the scattered half-crowns from his passengers, and with a “Thank you, sir”.
While the above is occurring in the fore part of the coach, a little arrangement is going on at the rear portion, where there is a dense crowd who gaze earnestly (as well as the darkness will enable them) into the body of the coach, endeavouring as much as possible to see who they are, what they are, and if possible find out where they come from. An inquisitive race are the gold-miners, which is not the only acquisition they are possessed of. Gallantry and an unfailing devotion to the fair sex is another, and their admiration cannot be exceeded; should fortune so favour them that their gaze should alight upon a lady passenger or two then they rest not till they succeed in learning whether those ladies are young or old—esteeming them both greatly, but yet, I must say, a prejudiced class are miners, showing a partiality and a greater amount of sympathy for the younger and best looking lady of the two. The gentlemen passengers seeing the mass of human beings that are taking a sight at them, not to be abashed or confused, and also to give a notion that they are perfectly at home and comfortable anywhere—jump off the coach as smart as possible, catching hold of their luggage or what-not, walking off with a jaunty springing step, and going quickly in a direction nowhere,—attempting to delude the lookers-on with the idea that they know the run of the place, and have been upon Gulgong before.
There are also (winding-up the coach business) a few more who hail the arrival of the coach as an advent perhaps slightly conducive to their welfare. There are the Sydney Mail and Town and Country gentlemen rushing about in a frantic manner, informing the bystanders that both papers are sixpence a copy this week—emphasising the this week—leaving his hearers to ponder and imagine whether the price will be ninepence or fourpence the next week, or whether they will be given away gratis.
Source: The Sydney Morning Herald, Sat 25 Mar 1871, Page 4

The post-office was at Angove’s store, and the sight of the [gold]field after the mail coach had arrived and the letters, etc, sorted the postmaster, mounted on a packing-case, called out the names alphabetically, and each person answered his name and received his letters, after being passed over the heads of the assembled thousands.
Source: Freeman’s Journal  Thu 9 Jun 1910 Page 7

In February 1871 Mary Angove gave the job of Postmistress away. In December 1872 the store was turned into Angove’s Hotel and three years later, in July 1875,  Richard Angove died and his wife Mary took over as licensee. The Hotel site remained in her name until at least 1880.
Photo source:
You can read more about Mrs Angove’s life here.
Previous Post: RESEARCH NEWS – RAILWAY HOUSE
Next Post: RESEARCH REQUEST – COLLINS & Co Bathurst