The Research Department received an interesting challenge this week: Could we locate a business named “A Collins & Co” of Bathurst in the Holtermann Collection? The business was known to be active in the town during the early 1860s, as evidenced by their long and exuberant advertisements in the Bathurst Free Press.

“Hail smiling spring, thy genial warmth imparts,
Fresh health, fresh strength and vigour, to all hearts,
Stern winter lays aside its storms and gloom,
And nature revels in her loveliest, blooms.”
Great Clothing Bazaar, (next to
Hunter and Co’s., Boot and Shoe
Depot, Bathurst,)

DEEPLY grateful for past favours, and ever anxious to deserve patronage, respectfully beg to inform their customers and the public generally that in addition to their already large stock, they have just received, to order, from England, an immense consignment of entirely New Spring Goods, including, every variety of

Suitable for the Season, all of the most approved, and newest Fabrics, and of the most modern, and elegant cut and fashion, a stock comprising every novelty, art, industry, talent and capital can possibly procure, and warranted of the best quality and design, that ever arrived in the colony, from the hands of the first manufacture in the world, adapted for all professions, pursuits and callings, and which in point of fact cannot be equalled, for taste, style, and elegance, among which will be found — Frock, Talma, Paletot and Lustre Coats, of every color, cut and quality.
Vests, in inconceivable variety, of fabrics and fashions. Trowsers of all patterns, in Doeskins, Tweeds and Silk-
like textures. Suits to match, of every kind, light and cool, for the Spring season.
Hats and Caps, of every material and shape.
All sorts of Men’s Mercery, Hosiery, &c, &c.
A large assortment of Gentlemen’s Mourning, also on hand.
Tents, Tarpaulins, Rugs and Blankets, of all sizes and qualities.
Saddlery of every kind, too numerous to name.
In short it being quite impossible, within the narrow limits of an advertisement, to do justice to this immense and novel stock of SPRING GOODS &c, A. COLLINS and CO, beg their numerous patrons, to avail themselves of this opportunity, to examine, select and purchase immediately, assuring them the price of each article, is considerably lower, that at any other house in the trade, the quality and workmanship much superior, the assortment, beyond all comparison, greater, and that “Delays are dangerous.”
Every article marked in plain figures, from which there can be No Abatement.
NOTE THE ADDRESS
A. COLLINS & CO’S. Clothing
Bazaar, next to Hunter and Co’s.
Boot and Shoe Depot, Bathurst.
‘ADVANCE AUSTRALIA.’
The Spring Goods are such, if you only once try This Bazaar for your Clothing, you can’t fail to buy.

In addition to the sprinkling of poetry, the ad helpfully told me that A Collins & Co were located next to Hunter & Co boot sellers and their ads described them as being next to the Royal Hotel on William Street.

My first discovery was that A Collins & Co had issued copper one-penny tokens in 1864. The Museum of Victoria described the following:

How the tokens were used was not stated. 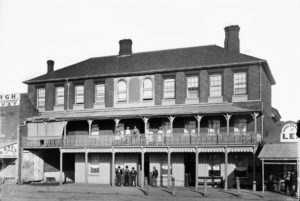 With a vague idea of the location, I started scouring Bathurst images taken by the American and Australasian Photographic Company (this was the name used by Henry Beaufoy Merlin, the chief photographer of the photos in the Holtermann Collection). The Royal Hotel was easy to find. But neither of its neighbours appeared to be “Hunter and Co.”

I then found two photos taken of the buildings to the left of the Hotel. They are attributed to Merlin’s company but are stored differently in the State Library. They can be found in an “Album of photographs of Sydney & country New South Wales, ca. 1871 / American & Australasian Photographic Company” but are not individually searchable. [This is, nevertheless, a rabbit hole worth going down if you have a few hours to spare].

Since these images do not have the high-resolution appearance that we know and love Merlin for, they were not very helpful to my research. I could only read some of the signage.

But this was no time to give up. I still had the right hand side of the Royal Hotel to investigate. I figured the letters “LEA…” could relate to leather (ie Hunter’s Boot company) so then I sought out other photos of William Street, Bathurst. Using Trove’s digital image search I found a very compressed side view.

This image is highly zoomable. Try it yourself on the State Library website. The sign circled in red says “HUNTER COMPANY”. But even when zoomed in, the yellow building’s sign is too hard to read. Could it say “A Collins & Co”?

Finally I found a photo of the east side of this section of William Street taken from the other end: 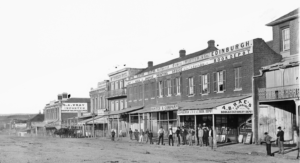 Here the “Hunter and Company” sign is clear, as are the names of the buildings either side. Alas, neither of them is Collins & Co. My best guess is that Collins had closed by this time. They had been recorded as spirit merchants in Bathurst in the Government Gazette’s of 1866 and 1868 but then the trail goes cold. The State Library dates all the Holtermann images as having been taken between 1870 and 1875.

Meanwhile, John Hunter opened a branch store in Gulgong by 1872 and so appears in Holtermann photos from there too!