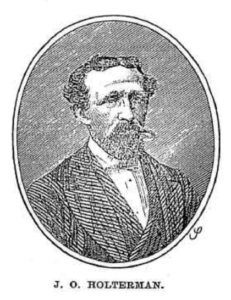 The following article – about the value of persevering – was written by the photographer, Beaufoy Merlin, describing his friend, Bernard Otto Holtermann. Ironically, this article was written and published before the record breaking discovery of the “Holtermann Nugget” and related instead to some preliminary finds of reef gold after 12 years of hard yakka in Hill End.

1872 – Perseverance Rewarded.—Mr. J. O. Holterman.*
[BY BEAUFOY MERLIN]
THERE IS probably no species of light reading in which future generations of Australians will take more interest, than narratives of those energetic and persevering men, who, in a special manner, originally assisted in developing the country’s vast mineral resources—more especially her gold, copper, and tin. Chief amongst these is the gentleman whose name heads this article, and who, amid danger and difficulty, privation and years of disappointment, succeeded at last not only in obtaining the reward of his persevering efforts, but in opening a road to prosperity for hundreds of his fellowmen.

Mr. Holterman is by birth a German, and possesses some of the best traits of the German character coolness, patient industry, and calm determination. Had he not, he would never have been able to surmount the many difficulties which beset his early life in the colonies.

Mr. Holterman arrived in Melbourne in 1858. At that time he could not speak English, beyond a few words picked up during the voyage. Nothing presenting itself in Melbourne, he set sail for Sydney a few weeks after his arrival in the former city, with a view to find out a relative of his. In this he was disappointed, as his relation had gone to the “diggings,” but to what particular diggings could not be ascertained. Mr. Holterman, friendless and alone, wandered about Sydney on the look out for employment, but, as he could not speak English, he failed in obtaining it. Disheartened, but never despairing, he lost no opportunity of trying to get something—anything honest—to do. At last he succeeded in obtaining a situation as steward to a small vessel bound for New Caledonia. He remained in this service for about half-a-year when circumstances again brought him to Sydney to seek employment. After many efforts to win the smiles of fortune by trying sundry occupations; he was at last forced to put up with the situation of waiter in a small public-house, in King-street, where he received the munificent sum of ten shillings per week and his “grub” for some seventeen hours work out of the twenty-four, every day in the week. This “billet” did not at all suit his tastes, and he was constantly on the alert to find something more congenial to his mind, and at length disgusted with it, he and a mate, Mr. Beyers, started off, one bright morning for “the golden west.” They “humped their swags,” like many less fortunate diggers, and made for Bathurst; from thence they trudged over a rugged and hilly country, carrying (each) some sixty pounds weight, till Hawkins’ Hill was at last reached, and the weary travellers, quite exhausted, threw themselves down in a shady nook, to get a few hours’ repose. Holterman mentions the satisfaction he felt on reaching the Hill. The painful experiences of that dreary journey, through a desolate and trackless region, made him at times feel that it would never come to an end — that he might die on the way; but, on reaching the height, he felt hopeful and contented. 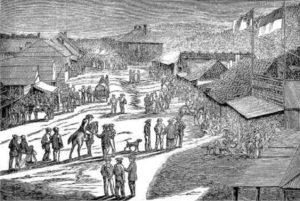 After a few days’ observation, his mate and himself selected a spot to work, from which they afterwards saw a large quantity of gold extracted. While working hard to procure a livelihood by surface digging, their great object was to come upon a gold reef. Others had sought before them to find that golden vein; but others did not persevere like them. With undaunted determination, Holterman and his “chum” continued their labours, although many discouraging circumstances occurred to bar their way to success, chief of which was their ignorance of blasting. They were nearly blown to pieces a dozen times in consequence of the clumsy way they applied gunpowder to their purposes. Holterman fell down the shaft on three occasions, on one of which he was severely hurt, and nearly killed two of his mates who were at work, some seventy feet below. He was flooded out several times, and the labour of pumping, when this occurred, was particularly trying to the patience of all concerned. The head of the enterprise and his friends had frequently to take four days work in the neighbourhood in order to get a little money to enable them to go on with their own special business of sinking. No one ever lent them a shilling. The party, at one time, consisted of four or five, but they were soon reduced to the two whose names are now so honourably associated together on the share market.

A frightful explosion, caused by about twelve pounds of loose gunpowder igniting, gave such a shock to Mr. Holterman’s system, besides inflicting severe wounds and contusions, that the people in the neighbourhood believed he would never recover; in fact, several persons came to his funeral one morning, a rumour of his death having been circulated. The illness and prostration caused by this accident lasted six weeks; at the end of that period of acute pain and privation, he went to work again with renewed courage.

The most trying part of this struggle was the necessity of earning money by working for others, or trading, so as to enable him to go on prospecting the vein. At last the moment of success arrived—gold was struck—and one of the most persevering miners in Australia had at last reached a fortune. It was an almost unexampled struggle. For eleven years did the two brave men, whose names have been mentioned, fight against difficulties of the most serious kind, and, at length, succeeded in conquering them.
Hawkins’ Hill was the principal scene of their operations, although they began business on Hill End, then started at Chambers’ Creek but failed there, chiefly in consequence of bad machinery, and made many other efforts, but all subservient to the one great purpose of fully developing their favourite spot on Hawkins’ Hill. 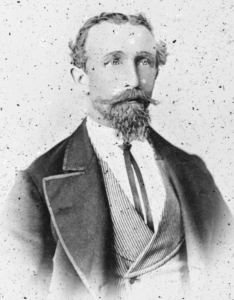 No portion of his toilsome career was more trying to Mr. Holterman than the last months he spent at Chambers’ Creek. He had procured a quantity of stores, on which he naturally expected to release a fair profit. The diggers, however, in their usual nomadic style, deserted the creek, and the unfortunate speculator was left alone to regale himself, if he could find any enjoyment in the act, with his own stores. At the close of this period he was literally tired of life; but his native energy came once more to his aid, and he started as ferryman at Root-Hog, on the Macquarie River. He worked this business so well, that he made good wages out of it; and, having got a few pounds together, he returned to the Hill. At this time he was offered 200 and an eighth of the whole for his interest in what afterwards became famous as Beyers and Holterman’s claim, but he was so sanguine of its ultimate success, that he refused to sell, poor and pinched though he was.

It may be mentioned that at a critical period of his struggle, his brother, a man of energy like himself, joined him. This was a fortunate circumstance, as they mutually stimulated each other to perseverance. They undertook to sink another shaft at Hawkins’ Hill, in conjunction with some former mates of Mr. J. O. Holterman, and after an arduous struggle, working sixteen hours a day, during several months, living all the time on credit, they felt as if they must give it up.

There had been five months’ wet weather, and they became ill, weak, and dispirited. The struggle was now a very serious one—life itself almost depended on it. They went to a depth of 150 feet, and no gold, they started driving to the westward but no gold appeared; one of the party lost hope to such an extent that he offered to sell his share—one sixteenth of the whole—for L300; but no one would give him more than L60 for it, for which sum Mr. Holterman bought it, having had to borrow the money at interest to pay for it. Such was the belief he had in the claim, at that trying time. Five weeks after this transaction the party struck a vein 19 feet west of the shaft, which went 50oz to the ton, on the first 30 tons; 40oz to the ton on 32 tons; 30oz to the ton on 46 tons; and 12oz to the ton on 124 tons. Since then a still richer vein has been discovered.

In bringing this rapid resume of a laborious but remarkable career to a close, it only remains for the writer to assure the reader that no statement is made except on the most unquestionable authority of living witnesses, who gave him, with much greater elaboration of detail than he now presents them, the particulars of the long and hard struggle which is here briefly recorded.

No one but Mr. Holterman himself can give an idea of the varying phases of fooling which agitated him, and through which he passed, during his twelve years’ struggle for fortune. Such a life as his, and his ultimate rewards, furnishes an excellent example to young men, who are too apt to succumb to the first blows of adversity. It would be well for them if they imitated the energy, directness of purpose, manly integrity, and public spirit of Julius* Otto Holterman.
Hill End, 30th October, 1872.

Click on the links to view the original high-resolution images via the State Library website and elsewhere.

* Merlin, who himself went by various names and spellings in his early life, refers to his friend as “Julius” in this article. He is more commonly known as Bernard Otto Holtermann,