Gulgong is so lucky to have been recorded in both the photographs of Beaufoy Merlin (known as the Holtermann Collection) and in the poetry and stories of Henry Lawson. There have been some wonderful links made between the two which help build up our picture of the town in the early days. For instance, did you know that Lawson mentioned “Sun Tong Lee” in his story “Christmas on the Goldfields“?

Here’s another snippet from the goldrush era. It’s from The Early Life of Henry Lawson and relates to his aunt:

Aunt Phoebe was living at Gulgong and she had a sewing machine and a parrot; and there were honeysuckles in front of her house (we called huts houses—or “places” when they had more than one room). I believed the parrot understood people and I used to talk to him a good deal.
Source: A Fragment of Autobiography by Henry Lawson 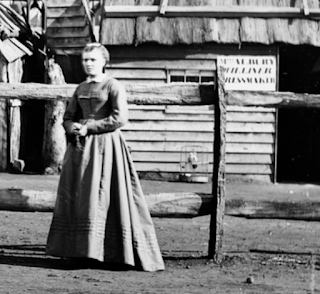 This cropped section from the Holtermann photo (below) shows “Aunt Phoebe” outside her dressmakers shop. That’s her pet parrot in a cage behind her. But where was the photo taken? Where was Aunt Phoebe’s shop?

The State Library caption for this photo ends with a question mark. It says: “Louisa Lawson, (mother of Henry Lawson), her son Charles William (born 25 June 1869) and her sister Phoebe Albury, (dressmaker), outside Mrs. Albury’s dressmaking shop, Gulgong area?” That means we need to look elsewhere to confirm the location.
We know that Louisa’s sister, Phoebe Albury married Richard Stear. He was later Mayor of Gulgong and owner of a vast number of town properties. We know there is a house at the corner of Medley and Bayly Streets that has a long association with Henry Lawson, but could the ownership possibly date back to the gold rush and the 1872 visit of photographers, Merlin and Bayliss? 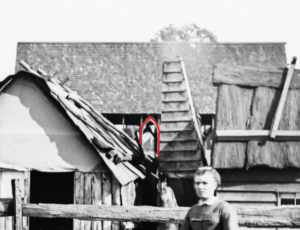 Thanks to our sharp-eyed volunteer, Maureen Hall, we have the answer. She noticed a peculiar feature in the background of this photo. Behind the chimneys is a large roof and behind that, a tree. Either it’s a very tall building, and an even taller tree, or the land rises upwards there.
Maureen also noticed what appeared to be a frame for a gothic window; something you’d expect to see in a church. Next, she discovered the same building in the process of having its roof completed. It appears in Picture 3 of the four images that make up the Panorama of Gulgong taken from Church Hill. From the surrounding buildings, we know this to be the Presbyterian Church on Bayly Street which confirms the location of Aunt Phoebe on the corner just downhill at Medley Street. 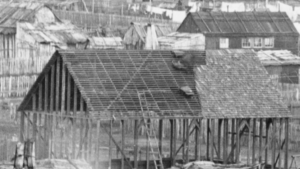 Another fascinating possibility in this photo, is that the blur on the incomplete church roof could well be the tiler in the process of completing the roof. That makes him one of only five people that can be seen in the entire panorama. And what does that have to do with Christmas? Not a whole lot. But no matter what time of year it is, working with the fabulous team of volunteers at the Gulgong Holtermann Museum, and pooling our knowledge to bring you these stories, makes me feel like all my Christmases have come at once.
Photo sources:
Previous Post: RESEARCH NEWS – MOST PHOTOGRAPHED
Next Post: RESEARCH NEWS – HOLTERMANN